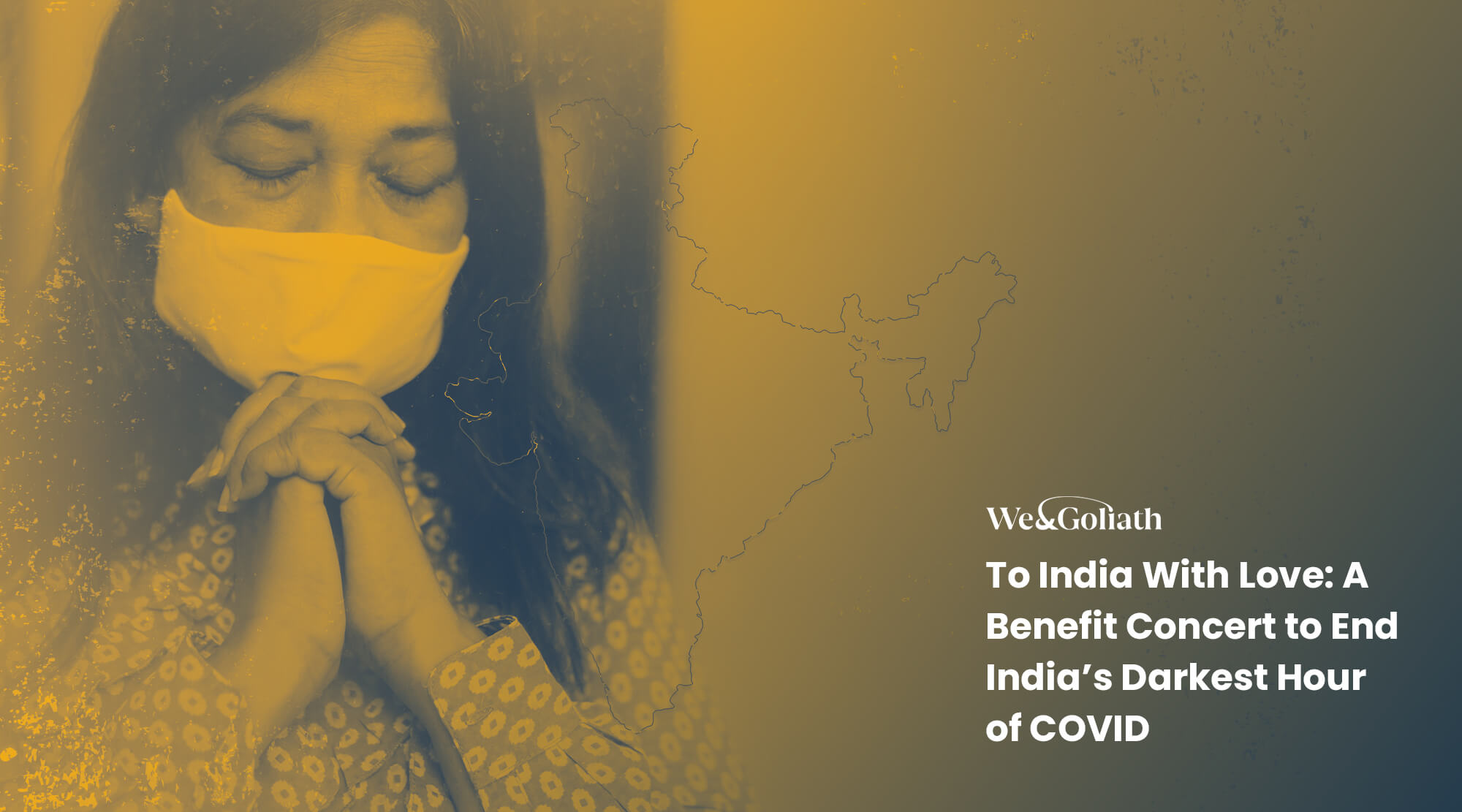 To India With Love: A Benefit Concert to End India’s Darkest Hour of COVID

By Daniel Moss, Co-Founder of We & Goliath

The thought of 1.3 million people packed closely together in India—without a worry in the world. This was easy to imagine five years ago, when the The Art of Living Organization held its third World Culture Festival in New Delhi. I saw it as I performed and represented the USA on center stage with an original rap called “Make Noise (For Peace)” alongside my friend & fellow artist Cozmic (aka Maaneesh). The sea of faces—dancing, singing along—was intoxicating. The moment is immortal to me.

The story of COVID’s impact is often told in numbers. Right now, India is second only to the U.S. in most critical COVID stats: New infections have risen to over 400,000 per day and the daily death toll has exceeded 4,100.

The global demand for vaccines has forced India’s hand in exporting more vaccines than it provides to its own population. Meanwhile, other essential supplies to COVID treatment, such as oxygen, are running out.

This is why We & Goliath has partnered with the International Association of Human Values (IAHV) to launch a week-long fundraising campaign, titled, #ToIndiaWithLove, that brings people together to raise resources and spread hope. Funds raised will go directly to Indian communities in greatest need. IAHV ensures this outcome through its national network of 10,000+ volunteers that work in and help create local community COVID Care Centers.

The ask we’re making is simple: Join us. Your registration is a critical donation to a cause that needs no validation. And it will serve the most valid need of all: the healthcare and treatment of those who cannot afford it. If your week already has the best of your schedule, you can donate directly to IAHV.

We cannot reverse the damage that COVID has wreaked on the lives of India’s most vulnerable. But we can help stop it. That’s why #ToIndiaWithLove has mustered this small army of poets, musicians and change-makers like you to help curb COVID’s spread, and heal those who have suffered.

It has been reported that the 2016 World Culture Festival, which attracted over 20,000 international tourists, inadvertently boosted India’s foreign exchange earnings by $42 million on the day of the event. If that kind of critical mass could greet India in the name of celebration and peace, think of what we can do in the name of saving lives.

Join us today for #ToIndiaWithLove. Let’s make a difference together.

EVENT MARKETERS: Why People Aren’t Signing Up For Your Event & What to Do About It (Without Spending a Dime)