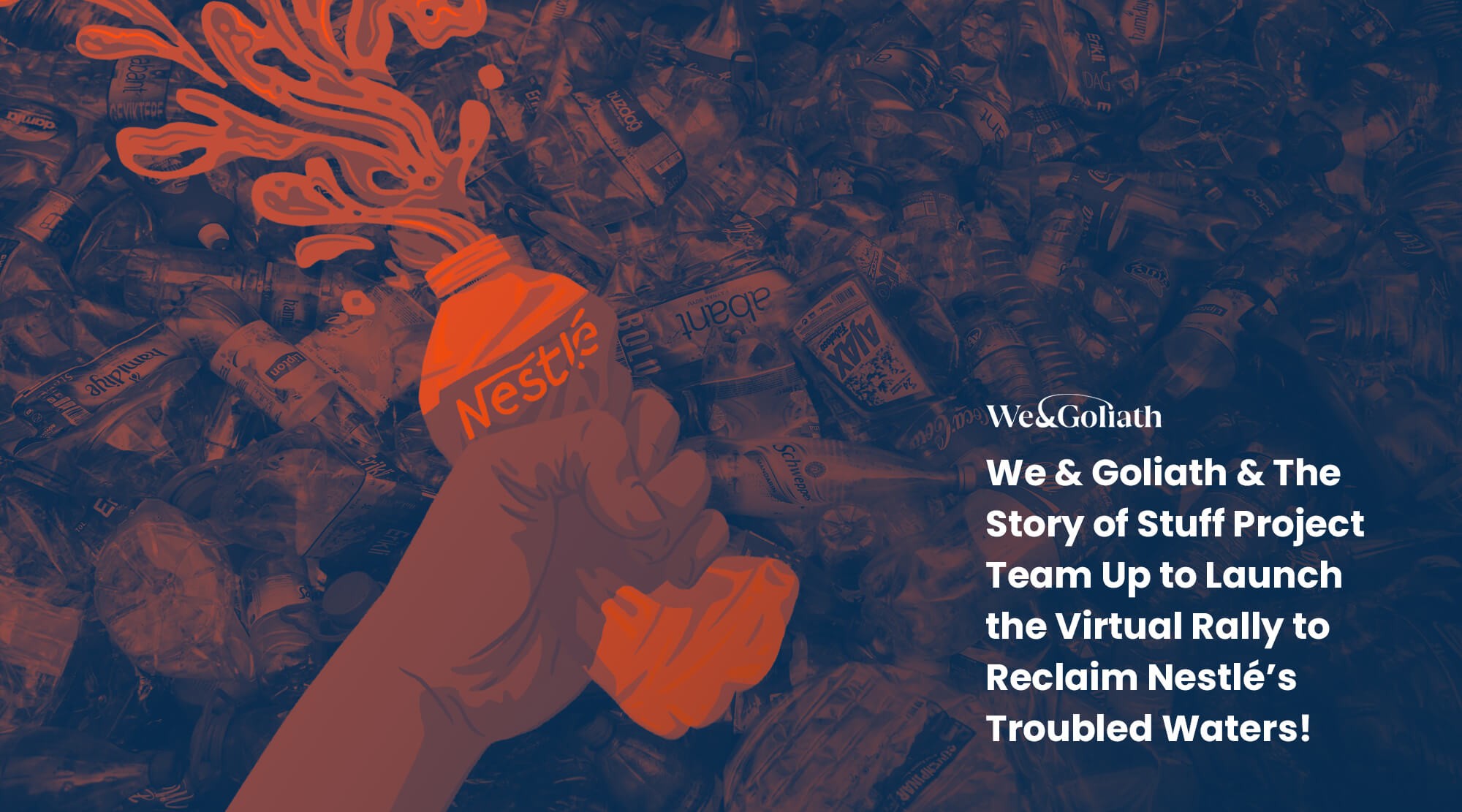 We & Goliath & The Story of Stuff Project Team Up to Launch the Virtual Rally to Reclaim Nestlé’s Troubled Waters!

Tonight We & Goliath is proud to partner with The Story of Stuff Project to launch the virtual Virtual Rally to Reclaim Nestlé’s Troubled Waters. The event will be hosted live on Facebook and Youtube on Thursday, March 18 at 4pm PT / 7pm ET. Registration links are at the end of this post.

What can you expect at Thursday’s Virtual Rally to Reclaim Nestlé’s Troubled Waters? How about hearing from grassroots leaders from across North America – featured speaker Representative Rashida Tlaib – musical performance by Tune-Yards – and a special celebrity guest. The event also features an interactive attendee photo booth that we designed to add a layer of togetherness.

The Story of Stuff Project is based on the 2007 online documentary and namesake by the group’s founder, Annie Leonard. SOS has supported and partnered with communities across the U.S. and Canada fighting to take back public control of their water. Tonight’s virtual rally shines a spotlight on five of Nestlé’s bottling operations that have generated fierce backlash resulting from the impact to the surrounding communities and their ecosystems.

The following excerpt is from Jacob Devaney’s article on Medium, titled, MANAVAI: A Call to Protect Sacred Waters:

The Story of Stuff Project has been a global leader educating people about important social and environmental issues for over a decade. They have created a coalition to demand that controversial Nestlé Waters’ sites be returned to public ownership before their proposed $4 Billion sale of Arrowhead, Poland Spring, Zephyrhills, Pure Life, Ice Mountain and others, to private equity firm One Rock Capital. In November 2020 they delivered a joint letter co-signed by more than 100,000 people in the U.S. and Canada to Nestle’s Swiss corporate headquarters. This massive private transfer of ‘water wealth,’ is an especially ominous development in light of Wall Street’s accelerating interest in ‘water futures’ trading.

In addition to privatization and desecration of sacred waters, these bottled water companies are some of the leading producers of plastic pollution on the planet. This is where people are making a huge difference by refusing to buy bottled water and instead using reusable water bottles. By talking to your friends about this issue, raising your awareness, and sharing this information on social media we will wrestle control of water from private companies and return them to public stewardship to ensure future water security for all life. Now is the time for people to come together like a rushing river and demand an end to the bottling of water for private profit. Live on Facebook and YouTube on Thursday, March 18 at 4pm PT / 7pm ET. RSVP here to receive a reminder email.

Explore Our Work
PrevPreviousCoulda, Shoulda, Woulda: How the Golden Globes could have avoided tech issues
NextHow to Become A Nonprofit Event PlannerNext